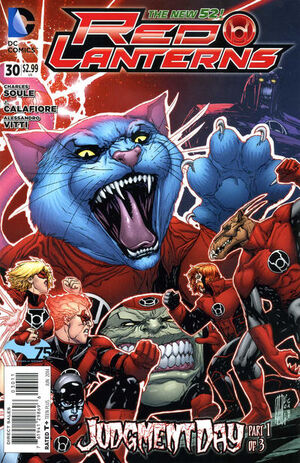 Doubt is gone. Pain is gone. They have burned away... replaced by rage.

In Sector 775, on the planet Primeen, the elderly Judge Sheko is about to sentence the serial killing Prince Karsik to death. The prince's father and king, however, orders Sheko's baliff Parthu to kill her. As Sheko is near death, a Red Lantern ring finds her. Now fueled by rage, Sheko used her new found powers to dispense justice on her homeworld.

On Ysmault, Bleez is in the Kaalvar's medical bay and explaining to Guy Gardner of Atrocitus' return. Guy promises to find the fallen Rankorr once the remaining Red Lantern rings are found.

With Supergirl guarding and befriending Bleez, Guy's search leads the Red Lanterns to Primeen, where the planet's police are failing to stop Sheko. Atrocitus also happens to be there with intentions to recruiting Sheko.

Retrieved from "https://heykidscomics.fandom.com/wiki/Red_Lanterns_Vol_1_30?oldid=1456044"
Community content is available under CC-BY-SA unless otherwise noted.