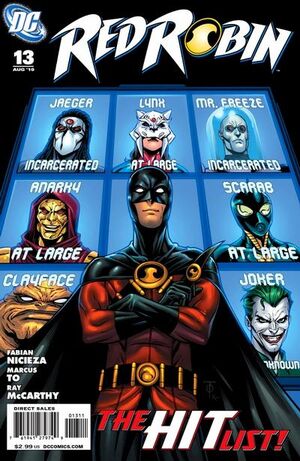 I wait for Lynx to come, knowing she can't refuse the challenge. Thinking... this isn't how Bruce would do it -- even Dick... luring out a bad guy to fight them in front of a crowd... just to make a statement -- and to set the "master plan" in motion...

Appearing in "The Hit List, Part One: The Domino Effect"Edit

Synopsis for "The Hit List, Part One: The Domino Effect"Edit

Retrieved from "https://heykidscomics.fandom.com/wiki/Red_Robin_Vol_1_13?oldid=1456074"
Community content is available under CC-BY-SA unless otherwise noted.