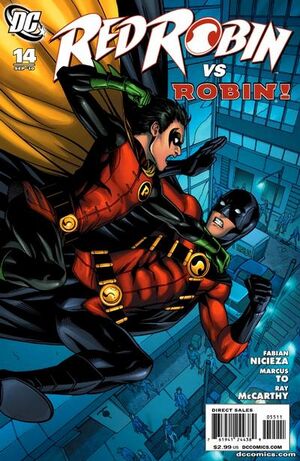 I have done all that has been asked of me! I control aspects of my upbringing that neither of you could begin to understand -- and I am dismissed -- by him -- as a threat to be monitored for some hidden agenda? It isn't fair.

Appearing in "The Hit List, Part Two: The Devil You Know"Edit

Synopsis for "The Hit List, Part Two: The Devil You Know"Edit

Retrieved from "https://heykidscomics.fandom.com/wiki/Red_Robin_Vol_1_14?oldid=1456075"
Community content is available under CC-BY-SA unless otherwise noted.