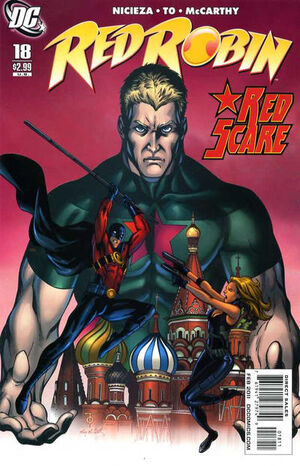 Lynx. Scarab. Steph. Cass and now this. I'm either the luckiest guy in the world or the most pathetic.

Appearing in "The Rabbithole, Part One: Broken Promises"Edit

Synopsis for "The Rabbithole, Part One: Broken Promises"Edit

Red Robin and Tam Fox arrive in Russia to investigate a wealthy businessman's possible ties to the Supervillain communications grid known as the Ünternet. But opposition from Red Star and a vengeful young woman known as Promise... complicate things.

Retrieved from "https://heykidscomics.fandom.com/wiki/Red_Robin_Vol_1_18?oldid=1518209"
Community content is available under CC-BY-SA unless otherwise noted.