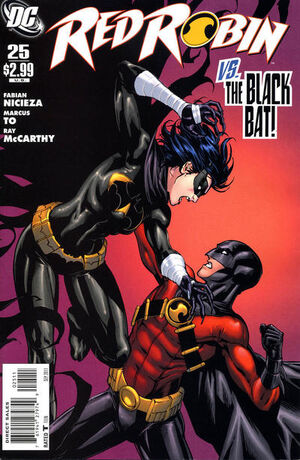 The worst part: I keep thinking, "Isn't this pretty much how we ended up with Damian?"

Appearing in "7 Days of Death, Part Three: The Bigger Picture"Edit

If he's going to avoid a fight against a psycho Super-Villain, end the 7 Days of Death, win the Assassination Tournament and discover ancient knowledge over life and death, Red Robin will have to survive a final battle against one of the world's deadliest assassins. Her name? Cassandra Cain!

Retrieved from "https://heykidscomics.fandom.com/wiki/Red_Robin_Vol_1_25?oldid=1456093"
Community content is available under CC-BY-SA unless otherwise noted.