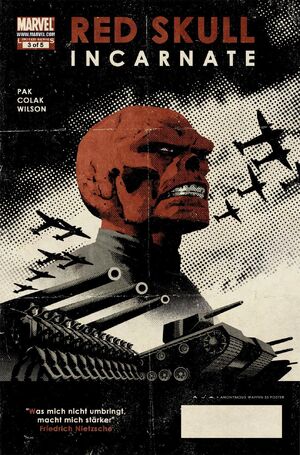 Johann Schmidt seeks out his destiny in a world teetering on the verge of chaos – the future as unpredictable to him, as it is tragic with the hindsight of history. A doom-spelling chain of events brings the Nazis to power in Berlin…and Johann, seeking power to ensure his survival, follows the path to becoming the Red Skull. By Greg Pak (MAGNETO: TESTAMENT) and Mirko Colak (SECRET WARRIORS).

Retrieved from "https://heykidscomics.fandom.com/wiki/Red_Skull_Vol_1_3?oldid=1450977"
Community content is available under CC-BY-SA unless otherwise noted.