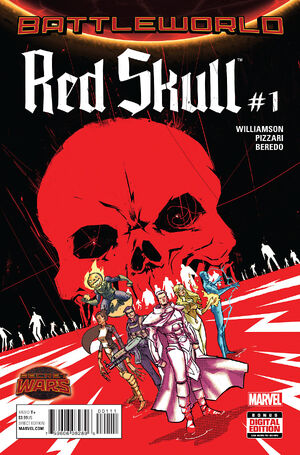 There is power in the world believing you have died. In other words... come with me if you want to die.

Appearing in "Part One: Hunters"Edit

• One of the most vile villains of the Marvel Universe gets his very own twisted Secret Wars series!

• Red Skull should be dead but his legend grows, so a team of villains that includes Winter Soldier, Magneto and Lady Deathstrike are sent on a dangerous odyssey to the Deadlands to prove it…but no one ever comes back alive from the Deadlands!

• Forced to overcome zombies, Ultron drones and the Annihilation Wave, the rag-tag team of villains will find that they may bitten off more than they can chew…

Retrieved from "https://heykidscomics.fandom.com/wiki/Red_Skull_Vol_2_1?oldid=1450980"
Community content is available under CC-BY-SA unless otherwise noted.