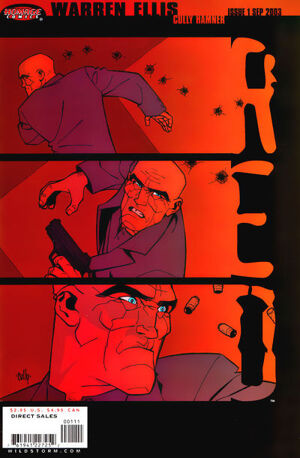 No one can know this even happened. That the world was even like this. He dies.

At the Central Intelligence Agency, new director Michael Beesley is being briefed by his deputy director Adrian Kane. To explain the full scope of their work, he is shown the worst top secret files in their history, those belonging to their top assassin. After witnessing the atrocities committed in the name of national security, Beesley flips out and fears public reaction should those secrets ever be revealed. He immediately orders the death of the man responsible to eliminate all traces of his actions.

Paul Moses is the former operative, living out his days in quiet retirement. Although he struggles every day to live with himself for all of the people that he's killed, he is relatively happy and complacent. His only contacts are his retirement handler Sally and his niece who writes him letters.

Returning to his home one night, Paul Moses is assaulted by a team of three professional killers. He gouges out the first one's eyes, grabs his gun and shoots him in the back of the head. Spinning around to cover himself, he blasts the second one in the face. Holding a gun to the third one's head, he correctly identifies them as CIA by their attack patterns. The man refuses to answer Paul's questions, so he executes him with a bullet between the eyes. Bloodied from his first combat in years, Moses places a call into his handler to announce the emergency situation, but finds that she has been transferred. He goes to the armory in his basement, and suits up one more time. Placing a final call to the agency, he announces that he is taking himself off of the green status of retirement and going red to become an active agent again. Then, he drives off to confront the men who betrayed him and kill them.

Retrieved from "https://heykidscomics.fandom.com/wiki/Red_Vol_1_1?oldid=1475181"
Community content is available under CC-BY-SA unless otherwise noted.