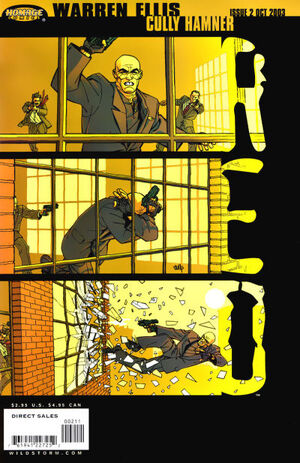 Hello. My name is Paul Moses. The pair of you ordered my death. Thank you for your names. Whatever I am, I became at the behest of this country and the CIA. If I am a monster -- and I was a very quiet, loyal monster -- then I am quite definitely your monster. All I asked for, when I retired, was to be left alone, to try and find a way to live with myself. I promised my silence and my retirement, and you promised me peace. You have decided to break your promise, for reasons I neither know nor care about. Therefore, I am making you a new promise. I promise you that everyone at the CIA who knows my name is going to die.

Paul Moses is back in action, and he's taking down the CIA operatives who have been sent to eliminate him. After brutally murdering all of the agents who have come to his estate one by one, he gets in their car and drives off. Despite the best efforts of Michael Beesley and Adrian Kane to contain the situation, he lives up to his reputation every bit as an unstoppable killing machine. On his path, he kills several more enemy agents at a police barricade. Once he obtains a phone, Moses calls the two agency directors and calmly announces his intentions. He neither knows nor cares why they have chosen to betray him when he was so obedient, but he knows their names, and he is coming to kill them, along with everybody else working for them who has even heard of his name.

He goes to visit his former retirement handler Sally, the only person he's had regular contact with for the past several years. She explains that he has already been reported dead, and he reveals his sordid past to her. Sally is shocked to find out what a monster her friend is, but he insists that he needs access to her computer because it's connected to the CIA. Before leaving, he apologizes and thanks her for being so kind to him throughout their relationship, then leaves. He almost kills her purely out of instinct, but stops himself, and tears run down her face while he walks out the door.

There is further discussion in CIA headquarters about the nature of the incident. Kane provides further backstory, and explains the full ramifications of reawakening this man, who is the best killer on Earth. It is clear that he is leading a direct assault on their location, one of the most heavily fortified areas in the country, and it is entirely possible that despite being a single old man, he is going to slaughter them all.

Retrieved from "https://heykidscomics.fandom.com/wiki/Red_Vol_1_2?oldid=1475182"
Community content is available under CC-BY-SA unless otherwise noted.