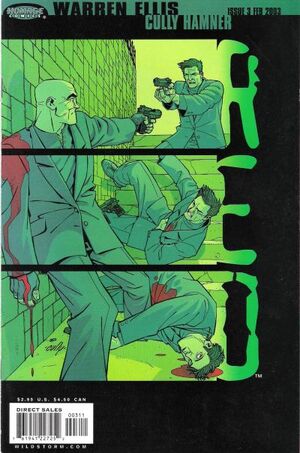 I kill people, you damn fool. I don't threaten. I don't pose. I don't play. I kill people. That's all I do. That's all I've done since I was nineteen years old. I can either hide and do nothing, or kill. You wouldn't let me hide. The people who come after you need to know what happens when I can't hide.

Paul Moses launches his assault on CIA headquarters. He guns down the sentries and snipes all soldiers posted guard, while sending his vehicle filled with demolitions careening into the front of the building. There is a massive explosion, and the building is placed on code red. Running around, he shoots everyone who gets in his way in the face. Placing a phone call to Michael Beesley and Adrian Kane, the men he has come to kill, he requests that they meet him like men outside. Instead, believing their soldiers have him cornered, they order him taken down, and he activates another booby trap killing even more men in a fiery detonation.

Out of options, Beesley threatens to have his niece butchered like a dog in her home if he doesn't put down his arms. At that very moment, Moses bursts through the door with his cellphone and a gun, having taking out the rest of the installation while they were talking. Kane reaches for his pistol and it's immediately shot out of his hand. Before executing them, Paul delivers a lecture. He has respect for Kane, a real man of the world, but nothing but contempt for Beesley. Beesley is a small sniveling coward, with no respect for the older generation, and he also informs him that he murdered his entire family on the way over. Killing is what he does, and it is all that he has done since he was a young man, at the behest of the government. He is considered a monster because he was willing to make the hard choices and accept the consequences like these men can't. Kane apologizes that things had to end this way, but reminds Paul that after an incident like the one he has created the only way he will ever find peace again is in death. Tears stream down the politician's face, and Paul reveals that he was lying about having killed the man's entire family, then asks him if he thinks they will miss him, and blows his brains out onto the floor. His boss dead, Kane is now the director of the CIA, and Paul decides to take him as a hostage. Instead, Kane tells him that as a reactivated agent, he is now working directly underneath him, and the only way out of the situation alive is to come back to work for the agency. Reinforcements are already gathered outside. Paul simply wants to be left alone, and he kills Kane as well with a gunblast to the chest. He walks out the door, laments that the country he worked to build no longer exists, and confronts a small army of men with assault rifles pointed directly at him. He points his gun at them, shouts out that he is the monster, and tells them to do their best.

Retrieved from "https://heykidscomics.fandom.com/wiki/Red_Vol_1_3?oldid=1475183"
Community content is available under CC-BY-SA unless otherwise noted.