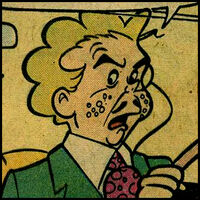 Reginald Van Dough, Sr. is the brother of Regina Rich and the super-strict father of Reggie Van Dough.  His face bears strong resemblance to Reggie, except that he has a black mustache and wears a monocle.

Whenever Reggie's father discovers his son playing pranks on people, or the pranks backfire on his father, he usually punishes Reggie for them, usually with a spanking.  On rare occasions, his allowance was suspended, or permanently taken away.

Retrieved from "https://heykidscomics.fandom.com/wiki/Reginald_Van_Dough_Sr.?oldid=1611030"
Community content is available under CC-BY-SA unless otherwise noted.