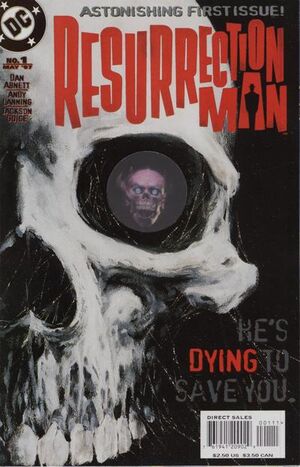 I hear a lot of stories like that on the road. About a Resurrection Man who can't lay down to die. Some of them are bad. Heard tell of a deathless vagrant who slays the poor folk who stop to give him a ride. They say he takes his sustenance from them and they --

A man named Mitch is killed in a drive-by shooting. He awakens and can't understand how he is still alive. Mitch goes to a library and speaks to a librarian who helps him look into what little he can remember about his life. Together, they find his obituary in a Viceroy, South Carolina paper. It seems his name was Mitchell Shelley and he was a lawyer who was killed in a gas main explosion at his office two years ago.

A pair of female bounty hunters called the Body Doubles try and capture Mitch. He flees.

Mitch walks to a diner where he stops an out of control tanker truck from ramming the diner. However, the truck explodes killing Mitch shortly after he rescues the driver. Three days later the Body Doubles show up and question the diner patrons about the incident.

Mitch walks along the road and passes a road sign that says he is now leaving Crucible.

Retrieved from "https://heykidscomics.fandom.com/wiki/Resurrection_Man_Vol_1_1?oldid=1456148"
Community content is available under CC-BY-SA unless otherwise noted.