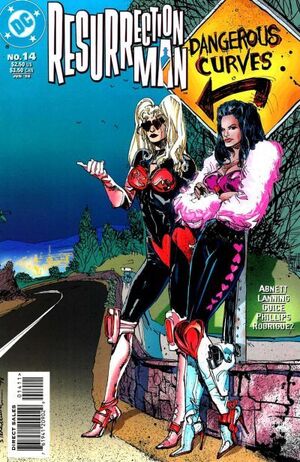 I would like to wrestle with you in Jello.

A former cop, Keach, now a prisoner in Levin County Penitentiary, goes berserk and starts busting heads in the prison laundry room. Later in his cell, he gets a visit from what he thinks is the spirit of his former cell mate, Spider, who killed himself. Spider tells Keach that he is now carrying something called The Rider in his soul. Spider explains that the Rider is an ancient phantom that pulls people's strings, making them do what it wants.

Later, on a highway chain gang work detail, the Rider makes Keach kill the police and some other prisoners and then escapes.

Retrieved from "https://heykidscomics.fandom.com/wiki/Resurrection_Man_Vol_1_14?oldid=1456161"
Community content is available under CC-BY-SA unless otherwise noted.