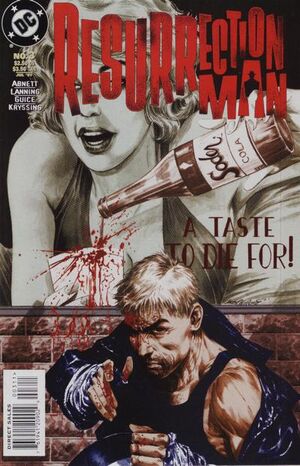 That's obvious. We're going to have to kill him all over again.

Resurrection Man arrives in Viceroy, South Carolina, where he died in an explosion two years ago. He begins remembering bits and pieces of his past.

In Ladell, Indiana, the Body Doubles rest up in a motel before deciding to look for Mitch in Viceroy.

Mitch goes to his father's home and finds some computer discs hidden in an old tree. He goes to his wife's place and knocks on the door. When Paula opens it, she falls to the floor. Mitch enters and comforts her, when a man named Richard arrives from the other room. Mitch heads to the shower and Paula and Richard conspire to kill him again.

Retrieved from "https://heykidscomics.fandom.com/wiki/Resurrection_Man_Vol_1_3?oldid=1456150"
Community content is available under CC-BY-SA unless otherwise noted.