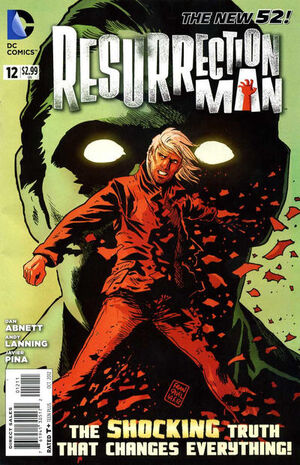 I've "spoken" to the Lab's mainframe. They don't intend to help me. My condition is incurable. I'm just a means to an end. So we'd better make that end the right one.

Appearing in "The Reborn Identity"Edit

Synopsis for "The Reborn Identity"Edit

Unexpectedly, Mitch Shelley finds himself in Gotham City rather than South Carolina, where he expected to be. Having appeared high above the city, he soon drops to his death on the street below. He revives in the shadow of the Batman, who plans to return him to Arkham Asylum, from which Mitch escaped some time ago. Mitch finds that he has resurrected with the power to unleash telekinetic heat blasts, but this power fails to help him as he is soon skewered on the trident of Aquaman and the rest of the Justice League.

This horror is in fact an illusion created by Hooker and his scientists, in an attempt to measure and analyze the effects of the Tektites on Mitch's body. He is still in the Lab in South Carolina, as he was captured. Mitch's friend Darryl Roth, who recently betrayed him, witnesses the torture that he is being put through, and becomes outraged. Hooker responds that the Tektites have a different effect on each person. While Mitch can resurrect, Hooker himself is immortal - but unable to heal. The Body Doubles are super-strong and cable of regeneration. Hooker's boss, meanwhile, has a special interest in Shelley and his Tektites. With any luck, they can replicate and use the way the Tektites affect Mitch for their own purposes.

Darryl sneaks past the guards and visits with Kim Rebecki, freeing her of her imprisonment and using technopathy to fashion himself a new set of armour as the Transhuman. Darryl knows that Hooker's promises of a cure for his condition are a sham. He is merely a means to an end, and it's time for he and Kim to assure that the end is the right one.

Mitch's visions continue, as he dies over and over with new powers. He is surprised when Darryl suddenly appears while he is being attacked by Darkseid, and drags him out of his dream. He discovers that he was being kept in stasis by Hooker's scientists, who are now being held at gunpoint by Ms. Rebecki. Attempting to appeal to reason, Hooker explains that they need to test Mitch in order to learn and work together. Maybe, they could perfect the Tektite process for the benefit of all mankind. Without hesitation, Kim fires two shots into Hooker's chest. Given his own relationship with the Tektites, he survives, but angrily, Mitch attacks him, knowing that Hooker had always banked on having Mitch kill him. After all, he was the only one who possibly could. With his dying breath, Hooker admits that it is better to die than to go on living dead.

Darryl warns that security has just been upgraded and tries to think of an escape route based on his remembrance of the design of the place. Unfortunately, before he can utter any directions, his head explodes. Behind him stand the Body Doubles and Hooker's employer, armed with a giant mech-suit. Desperate for justice over Darryl's murder, Mitch attacks this new enemy, but he finds himself in the suit's iron grip. Confused, he demands to know who this man is.

The man inside the suit explains that he is the CEO of the Lab - and he thought Mitch would have figured out who he is by now. He is Mitchell Shelley, and he has been dying to meet the Resurrection Man.

Retrieved from "https://heykidscomics.fandom.com/wiki/Resurrection_Man_Vol_2_12?oldid=1456188"
Community content is available under CC-BY-SA unless otherwise noted.