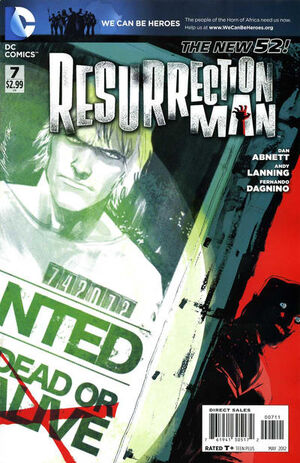 I was so mad at him! I wasn't even thinking! Is that what my mind is hiding from me? Is that the memory that won't come clear? That man I dreamed about. That ruthless man... Was that me?

Metropolis is the City of Tomorrow, and while development is helping to level some of the city's eyesore slums, it is also threatening heritage buildings such as the Bradbury Hotel. This happens to be where Mitch Shelley has taken up residence since he escaped from Arkham Asylum.

Unfortunately, the Metropolis Police Department seems to be converging on the place, and interrupts Mitch's attempts to clear his head, and try to understand the dreams and memories he's having. When he rushes into the hallway, he realizes that the police have not come for him at all, and they're evacuating the tenants.

Downstairs, the police are fighting with a gang led by Mr. Untouchable. He believes that Intergang has tried to cut his gang out of the action in Metropolis by selling the location of their meth lab to law enforcement. However, despite the police's engaging the gang in a gun fight, Mr. Untouchable is literally untouchable, using a special force-field suit. Observing, Mitch realizes that the suit is nearly identical to the one he saw in a dream. He wonders if the dream was a memory, and if he was really as ruthless as the dream made him seem.

Meanwhile, Mr. Untouchable's fighting begins to tear the building apart, and much of it becomes engulfed in flame. Mitch feels compelled to help those who are still trapped in the building, and so he resorts to using his most recent super-power to move the flames aside. After leading the tenants to safety, Mitch is stopped suddenly by a policeman who recognizes him as an Arkham escapee. The man won't let Mitch go, regardless of his having helped the civilians, so he uses his power to escape, and heads back into the building to save more lives.

Mitch wonders if perhaps he went back into the building because he used to be a super-hero, and he is compelled to help people. He faces down with Mr. Untouchable, but his rage becomes overwhelming. He corners Mr. Untouchable and plans to consume all of the oxygen within his force-field suit using the flames his current super-power can conjure. Fortunately, at the last second, he realizes that he is not a killer, and hesitates. This allows Mr. Untouchable to pepper Mitch's body with bullets.

Mitch dies, but it is not long before he comes back with a new ability. This time, he has a psychokinetic force-field - far more advanced than Mr. Untouchable's artificial screen. Using his new ability, Mitch reaches through Mr. Untouchable's shields and shuts off his force-field, leaving him vulnerable to the eventual explosion of the building. Despite his vulnerability, Mr. Untouchable claims to to be able to stop the blast from happening.

Outside, the staff of the Daily Planet begin gathering to cover the Bradbury's destruction. Suddenly, everyone outside is taken aback by the sight of a glowing green light funnelling the fire and heat from the explosion up into the atmosphere and away from the city.

Afterwards, Mr. Untouchable is caught and arrested, while reports surface of a man with strange powers who saved everyone. Meanwhile, Mitch disappears into the crowded city, wondering about his past. He decides to check out the Metropolis library for any information he can find about himself.

Retrieved from "https://heykidscomics.fandom.com/wiki/Resurrection_Man_Vol_2_7?oldid=1456183"
Community content is available under CC-BY-SA unless otherwise noted.