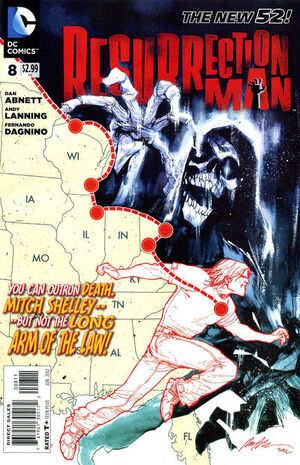 I thought you were a really nasty piece of work. But then I touched you, and I saw... I saw what you are. You are not a monster, and I am truly sorry I came after you.

Kim Rebecki is a private investigator with the remarkable ability to use psycho-metrics; psychic flashes through touch. She has been contracted by someone to find Mitch Shelley, the legendary Resurrection Man. She is not the only one looking for him, though, as a necromancer called the Butcher is seeking him too. The Butcher uses the lives of innocents as fuel for his magic spells. At the same time, both seekers become aware of Mitch's location.

Mitch has decided to check out the Metropolis Public Library, in the hope of finding some kind of information on the man he used to be. Unfortunately, digital records don't seem to have any information on The Lab or his history of working for a defence contractor in Iraq. As he attempts to find print archives, he bumps into Kim Rebecki, who suddenly has a very powerful psychic flash. The woman momentarily loses consciousness, giving Mitch enough time to discover what her profession is, and that she was looking for him.

Not long after Kim comes to, the pair are attacked by the Butcher. The necromancer demands that Mitch submit, and Mitch naturally refuses. He uses his most recent power - souped up psychokinesis - to knock the Butcher away from him. The necromancer begins throwing fire at Mitch, which burns him, prompting Kim to try to come to his defence. Unfortunately, the Butcher knocks her back hard. He turns on her prone body, planning to use her for fuel, but Mitch won't allow it, and sends him flying with a psychokinetic bolt.

As Mitch and Kim try to escape, she explains that the nature of his power, having had a psychic flash when he touched her. The Butcher kills some of the innocents at the library before using their energy to fuel his magic and come at Mitch again. Mitch demands to know who sent him, and the Butcher will only say that Hell sent him, and he wants nothing except Mitch's life. He thrusts a knife through Mitch's chest, and the man falls to the ground in death.

The Butcher tries to use Mitch's death to fuel his magic, but when Mitch resurrects, the spell backfires, and uses his own life instead. All that's left is a crater. Helping Kim up, Mitch explains that while he felt obligated to save her life, he doesn't trust her. She apologizes for having looked for him, explaining that when she had researched him, he seemed like a very bad person, and she felt no shame in tracking him down. When she had touched him, and seen inside his mind, she found out that he was something much more than what she had researched - something better. She would never have tracked him down if she had known.

Kim looks up in horror to see the Suicide Squad advancing on them.

Retrieved from "https://heykidscomics.fandom.com/wiki/Resurrection_Man_Vol_2_8?oldid=1456184"
Community content is available under CC-BY-SA unless otherwise noted.