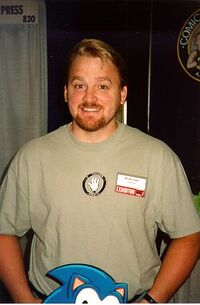 Grew up and still lives in Wisconsin. Still sees all his childhood chums on a weekly basis. Enjoys fitness in all forms especially working out with weights and playing softball and basketball--sustains a myriad of unique injuries along the way keeping the ongoing battle against time a challenging and often painful one. Was the proverbial "class clown" growing up but also liked a good tussle! If MMA was invented in his heyday would have been Ultimate Fighting Champion Of The World! Is married to wife, Sandra, and has lovely daughter, Stella, who is the absolute sunshine of his life. Has had "the curse" (or "gift" of being artistic as some foolishly refer to it)since 4th grade and has been consumed with creating ever since. Got an Associates Degree in Commercial Art in 1988 and has worked professionally as an artist and then writer since that time. Has worked as a storyboard artist for dozens of animated shows and has had two graphic novels published by Top Shelf Productions--Three Fingers and The King. Is best known for his creator-owned series/characters "The 3 Geeks" which garnered 3 Eisner Nominations in 1999. Has recently started working as a writer for Marvel and is helping to define the new Guardian character of Omega Flight.

Has worked professionally as an artist since 1988 in TV, children's books and comics. See above where he rambled on and on.

Retrieved from "https://heykidscomics.fandom.com/wiki/Rich_Koslowski?oldid=216510"
Community content is available under CC-BY-SA unless otherwise noted.