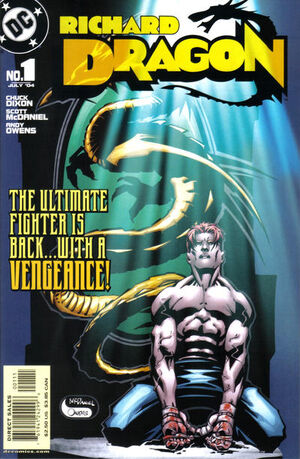 I knew you were down, Richard, but I never dreamed how far.

Richard Dragon tries to forget his past. He does this by taking part in illegal fighting matches. He fights two opponents bare handed while blindfolded. He easily wins all of his fights.

One night after a fight, Bronze Tiger shows up and asks for Richard's help with a group of people called the Circle of Six. Richard turns down Ben and to further convince Richard to help, Ben fights Richard, ultimately defeating him and gaining his assistance.

Retrieved from "https://heykidscomics.fandom.com/wiki/Richard_Dragon_Vol_1_1?oldid=1456189"
Community content is available under CC-BY-SA unless otherwise noted.