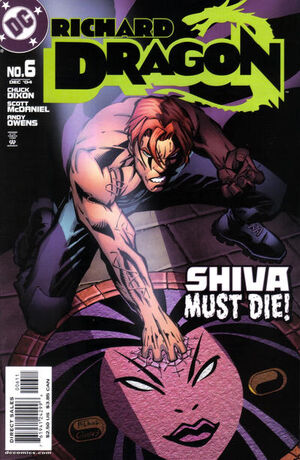 They lie there. Their lives my gift to you.

Richard Dragon and Bronze Tiger defeat four of the Circle of Six. Police waiting outside are sent in to mop up the scene.

Ben arrives home before Dragon and is ambushed by the other two of the Circle of Six. The Circle leave to find Dragon. An ambulance comes and picks up Ben.

Lady Shiva kills Tengu and Iron Aron Abromowitz. Dragon arrives and tells Shiva that he won't fight her. He then goes to the hospital to visit Ben.

Retrieved from "https://heykidscomics.fandom.com/wiki/Richard_Dragon_Vol_1_6?oldid=1456194"
Community content is available under CC-BY-SA unless otherwise noted.