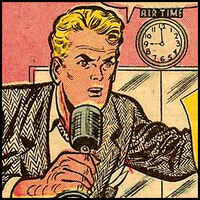 Rick Horne is a reporter and love interest of Linda Turner. Initially Horne is employed as a reporter for the Los Angeles Globe. In later appearances, he works for a Hollywood trade paper as a columnist. Near the end of the series, Horne also had a radio broadcast, in much the same manner of Walter Winchell, where he broadcast news and entertainment interviews. Horne is aggressive and seemingly fearless, often using his fists to escape hazardous situations or to subdue criminals. Though his fighting prowess is surpassed by The Black Cat, he is often a help to her. Horne was mistrustful of Black Cat at first and denigrated her efforts to bring Garboil to justice. However, as they worked together more and more, Horne was impressed with Black Cat's ability and began to view her as an efficient force against crime and an attractive fantasy woman.

At the same time, Horne struck up a casual friendship with Linda Turner without realizing she is also The Black Cat. Their relationship grew over the years, to the point where the two began to date and maintained a tenuous commitment to each other. But Horne is more attracted to the mysterious fantasy of The Black Cat than to the glamorous Linda Turner, and Linda seems determined to keep the reporter at arm's length until he commits to her rather than his fantasy woman, even though both are the same woman.

Retrieved from "https://heykidscomics.fandom.com/wiki/Richard_Horne?oldid=1610921"
Community content is available under CC-BY-SA unless otherwise noted.