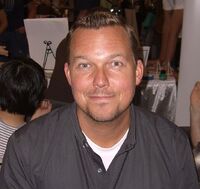 Rick Remender is an American comic book writer and artist who resides in Portland, Oregon. He is best known for his work on Marvel Comics' Punisher series, as well as Fear Agent, Uncanny X-Force, and Venom.

While in the early stages of his comic book career, Remender worked in animation on such films as The Iron Giant, Anastasia, Titan A.E. and The Adventures of Rocky and Bullwinkle. He penciled the final mock comic book cover in the opening sequence of Ultraviolet and taught animation and comic art part time at the Academy of Art University in San Francisco.[citation needed]

He has illustrated album covers and promo art for punk/metal bands such as NOFX, 3 Inches of Blood, Pitch Black, Lagwagon and No Use for a Name.[citation needed]

Remender illustrated the comic book adaptation of the movie Man With the Screaming Brain, which was published in 2005 by Dark Horse Comics and year later he drew the series The Last Christmas, which was written by Brian Posehn with Gerry Dugan and inked by Hilary Barta.

On January 8, 2007 it was announced on his column Against The Grain that he would be teaming up with French artist Paul Renaud for a Red Sonja one-shot published by Dynamite Entertainment titled "Vacant Shell".[1] He is also working on the horror line Crawl Space with Kieron Dwyer, which will include stories like XXXombies.[2] He had previously worked with Dwyer on Sea of Red[3] and Night Mary.[4]

Remender was working on the Dark Horse Comics series The End League,[5] as well as launching a giant robot series Gigantic,[6][7] he will also be relaunching Fear Agent[8] and starting a new series at Image Comics called Sorrow.[9]

He became co-author of Punisher War Journal with Matt Fraction from issue #19 to 25 and then was the main writer on the new and eighth Punisher series. IDW Publishing also released a "master edition" of Black Heart Billy.[10] In April 2009, Remender signed an exclusive writing contract with Marvel Comics[11] but was still able to release the series The Last Days of American Crime through Radical Comics.[12][13] In late 2010 he launched the new title Uncanny X-Force.[14][15]

He served as a writer on Electronic Art's game Dead Space and was the lead writer for Epic Games' Bulletstorm, which was released on February 22nd, 2011.

Retrieved from "https://heykidscomics.fandom.com/wiki/Rick_Remender?oldid=150219"
Community content is available under CC-BY-SA unless otherwise noted.