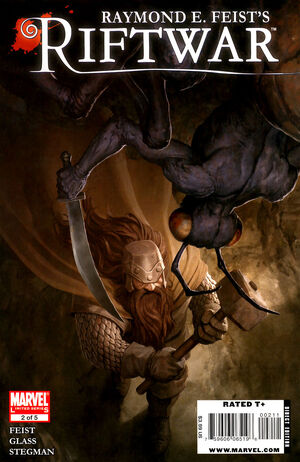 The War between the Tsurani and the people of Midkemia rages on, touching every corner of the land. Princess Carline still hopes for the life of her friend and first love, Pug, who is now, unbeknownst to her, on the other side of the rift, in another world. Meanwhile, Tomas has fled to the mountains to assist the dwarves in defending their land against the Tsurani, but his enchanted armor seems to be exercising increasing control over him, giving him greater and greater abilities. But where is the armor from, and will Tomas be able to control it, before it controls him?

Retrieved from "https://heykidscomics.fandom.com/wiki/Riftwar_Vol_1_2?oldid=1471436"
Community content is available under CC-BY-SA unless otherwise noted.