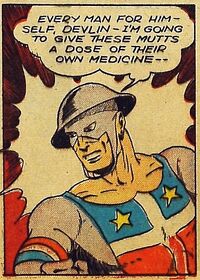 Suppose that handful of Marines on Wake Island felt the same way you do -- They'd have been licked in no time. But together they were a match for any amount of Japs that came at them -- What do you say, Bill ??

-- the Ghost of Flanders src

Supposedly dead in the Battle of Marne, in the First World War, "Rip" Graves operated in the Second World War as a masked superhero from a crypt beneath the Tomb of the Unknown Soldier. He secretly and single-handedly excavated and built this sub-crypt base. The Ghost of Flanders used a red poppy as his trademark, commemorating the Second Battle of Ypres, on Flanders Fields.

The Battle of Marne took place from 5–12 September 1914, which was two and a half years before the United States entered the First World War. The chronicles are unclear as to the details of Graves' participation in that action.

Retrieved from "https://heykidscomics.fandom.com/wiki/Rip_Graves_(Quality_Universe)?oldid=1498767"
Community content is available under CC-BY-SA unless otherwise noted.