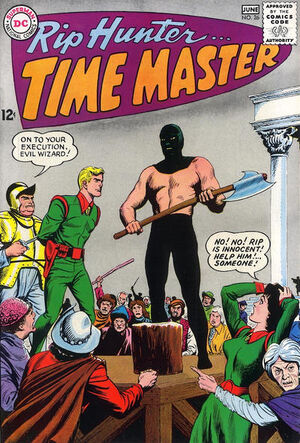 Hmph! Rip told us to guard the Sphere and the first thing Jeff does is go to sleep!

Appearing in "Bring Back the Cosmic Key"Edit

Synopsis for "Bring Back the Cosmic Key"Edit

At a secret government launch pad, a team of astronauts embark upon the first manned space voyage to explore beyond the Earth and the moon. The rocket is caught up in a cosmic storm and propelled far off course. It eventually settles in the orbit of Jupiter. The astronauts radio back to command for navigational instructions so they can return home. The scientists do not know enough about Jupiter to accurately plot a return course, so they turn to Rip Hunter. They tell him that only the 17th century astronomer Galileo possesses sufficient knowledge of Jupiter and its orbit. Rip agrees to help out and the Time Masters and he travel back to the year 1633.

Arriving in the city of Rome, the Time Masters disembark the Time Sphere only to find themselves accosted by a giant demon. Rip orders Bonnie to use the Time Sphere's Thermo-Gun against it, and soon discovers that the "demon" is actually an over-sized battle-suit manned by Galileo himself. The fighting stops and Rip introduces himself to Galileo. Galileo explains that he built the demon robot to scare off soldiers who have been attempting to arrest for witchcraft. The Time Masters accompany Galileo back to his home and Rip explains why he needs the astronomer's help.

Meanwhile, Colonel Sironi (who has been aching to arrest Galileo) mounts an attack against his home with several siege weapons. Fireballs begin descending upon Galileo's house. Rip and Galileo scare the soldiers off by casting bizarre shadows with a flashlight while Bonnie, Jeff and Corky use CO2 foam from the Time Sphere to put out the fire.

Colonel Sironi manages to capture Rip and Galileo however and they are placed on trial. Due to his age, Galileo is only given a lifelong prison sentence, but Rip is sentenced to be executed. Guards march Rip outside to a platform where an executioner prepares to behead him. Jeff and Bonnie come to the rescue and disarm the executioner and the guards with their carbines. All four retreat to the Time Sphere to plan their next act. Rip and Jeff ambush two prison guards and take their uniforms. Impersonating soldiers, they enter the cell block until they find Galileo. Rip knows that Galileo will be freed from jail in less than a month, so he makes his visit quick. Galileo provides Rip with the equations he requires and the Time Masters return to the 20th century.

Rip gives the mission control specialists the data, who in turn use it to plot a course from Jupiter back to Earth. The astronauts return home safely.

Retrieved from "https://heykidscomics.fandom.com/wiki/Rip_Hunter_Vol_1_26?oldid=1456255"
Community content is available under CC-BY-SA unless otherwise noted.