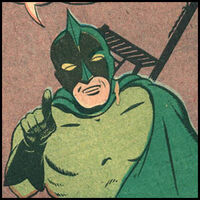 There is one hour you overlooked—the hour of retribution. The last hour on Earth before you walk to the gallows!

Bob Dickering was the brother of John Dickering (The Comet). When John was about to go to trial as a chief witness against racketeer "Big Boy Malone," the gang leader sent orders to kidnap him. A few days later, Malone's henchmen entered John's apartment and grabbed Bob by mistake. Before they could force him into their getaway car, The Comet came to his brother's rescue, but was gunned down in a hail of bullets and mortally wounded. With his brother dying, Bob swore to carry on the fight against crime and became -- The Hangman.

Bob would later marry his brother's girlfriend Thelma Gordon, a newspaper reporter. Together they would have a son Steven Dickering. While his father was dying in the hospital, his son Steven donned his costume and became the "new" Hangman.