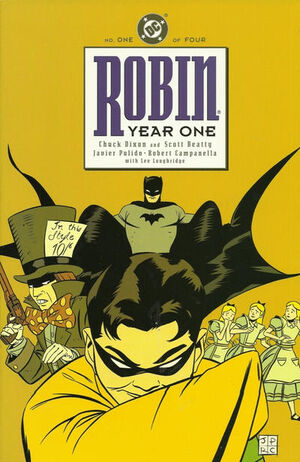 Master Richard carries so much on his young shoulders, the normal troubles associated with adolescence in addition to sharing Master Bruce's crusade. I only wonder if he knows how casually he is throwing away the years of his youth.

Batman and Robin investigate a string of kidnapping taking place in and about Bristol Township. When one of the kidnap victims turns out to be a girl from Robin's school, the Boy Wonder attempts to solve the case on his own. He finds that the Mad Hatter has been enticing teenage girls with free headsets. His hat transmits a broadcast signal to the headsets that enables him to hypnotize his captives. His plan is to sell the captive girls to Generalissimo Singh Manh Lee of Rheelasia. Robin tracks the Hatter and Generalissimo Lee to the latter's yacht. He fights through a horde of goons, rescues the girls and exposes the Mad Hatter's plot. Batman is at first angry with him for going it alone, but is proud of his accomplishments.

Retrieved from "https://heykidscomics.fandom.com/wiki/Robin:_Year_One_Vol_1_1?oldid=1489829"
Community content is available under CC-BY-SA unless otherwise noted.