Start a Wiki
Part of the 'Robin: Wanted' event 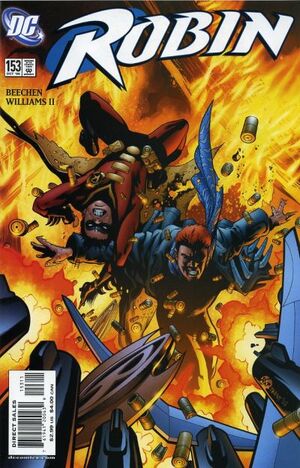 You know what? You suck. You're jealous 'cause I have powers and you don't! And you're a... a.. what's it called? Hypocrite.

Appearing in "Run Through the Jungle"Edit

Synopsis for "Run Through the Jungle"Edit

Captain Boomerang provides Robin with a catalog of super-villain headquarters that he obtained from his brief association with the Society of Villains. They begin scouting out each and every lair in the hopes of finding the nuclear device.

The first place they stop at is one of the Mad Hatter's abandoned quarters. They set off an automatic defense mechanism, which causes the ceiling to collapse upon them. Robin and Boomerang both manage to avoid the trap.

Outside, they run into Dodge who announces himself as Robin's new sidekick. Robin tells him that he is too young for this kind of life and warns him to go home. Dodge calls him a hypocrite and teleports away.

They next stop at the empty headquarters of an obscure villain known as the Glass Man. The Glass Man's lair is likewise booby trapped with sharpened, sliding panes of glass. They evade the dangerous pitfalls, but fail to find the device.

They continue on their quest, scouring the known whereabouts of villains such as Doctor Double X, Doctor Phosphorous, Killer Croc and the Scarecrow. At one of the Ventriloquist's safe houses, they square off against a dozen robotic versions of Scarface. They destroy the robots and locate the bomb. Robin manages to deactivate the weapon with only fifty-two seconds to spare.

The two part company, but Robin is still not particularly friendly towards Boomerang.

Retrieved from "https://heykidscomics.fandom.com/wiki/Robin_Vol_4_153?oldid=1518401"
Community content is available under CC-BY-SA unless otherwise noted.