Start a Wiki
Part of the 'Robin: Teenage Wasteland' event 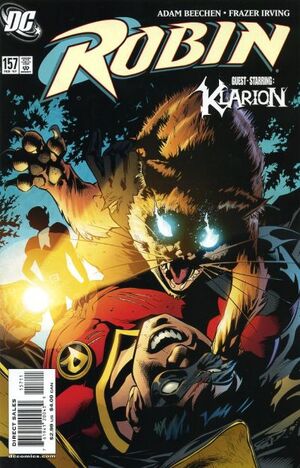 Excuse me. I'm missing my cat. White and orange? He answers to Teekl. From the looks of you, I'm guessing you've seen him.

Appearing in "Things That Go Bump in the Night"Edit

Synopsis for "Things That Go Bump in the Night"Edit

Robin rescues a mangy, orange cat that was seemingly stuck in a tree. On his way home, he discovers several mutilated bodies in an alleyway. He hears the sound of a wailing creature, and attempts to track it, but it quickly disappears.

Returning to Wayne Manor, Robin tries to pawn the cat off on Alfred. Alfred wants nothing to do with the beast, but Robin reassures him that he will take it to an animal shelter at his next earliest convenience.

The following day, Tim goes to school and has a talk with Zoanne. She is mad at him for not calling her after the hostage crisis to let her know that he was okay. The two make up, and Robin asks her out on a date.

That night, Robin is driving around town on his motorcycle en route to drop off the cat. A blinding flash of light causes him to lose control, and he topples the bike. The cat's cage opens up, and the animal darts into an alleyway. Robin gives chase, only to run into a nightmarish creature known as the Judgment Beast. The Beast swats him around, and knocks Robin unconscious. Afterwards, it takes off into the sky and flies away.

When he comes to, Robin finds Klarion, the Witch Boy, standing over top of him. Klarion is looking for his cat, Teekl.

Retrieved from "https://heykidscomics.fandom.com/wiki/Robin_Vol_4_157?oldid=1456438"
Community content is available under CC-BY-SA unless otherwise noted.