Start a Wiki
Part of the 'Batman R.I.P.' event 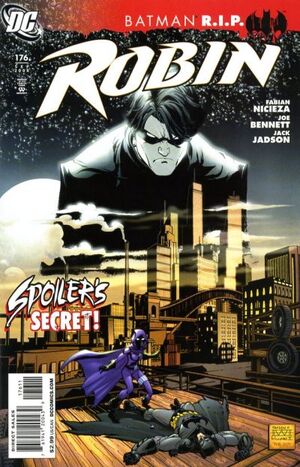 A Gotham City without Batman... will always have me.

The preview for this issue reads: A "Batman: R.I.P." story! The shocking conclusion that will start of the rest of Tim Drake's life — or is it the end? With Batman missing, Robin becomes the new Dark Knight. It's Robin and Spoiler in an all-out brawl with Gotham City's underworld — but with Batman's trail growing cold, the end of this fight will decide the future of the Bat family!

Retrieved from "https://heykidscomics.fandom.com/wiki/Robin_Vol_4_176?oldid=1456458"
Community content is available under CC-BY-SA unless otherwise noted.