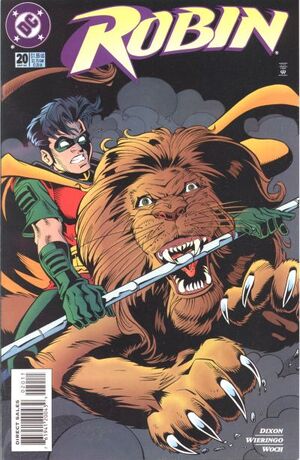 Appearing in "The Empire Strikes Out"Edit

Synopsis for "The Empire Strikes Out"Edit

Robin calms the lion and is rescued by the General's siblings, who aren't at all fond of their brother. He and Sherrif Smith then pursue the General as he leads Los Bandidos against the Vandals gang. The General is brought in, but Julius Caesar escapes, back to his leader, Maxie Zeus. Tim then returns home to discover Ariana in his bedroom - she's run away from home...

Retrieved from "https://heykidscomics.fandom.com/wiki/Robin_Vol_4_20?oldid=1690097"
Community content is available under CC-BY-SA unless otherwise noted.