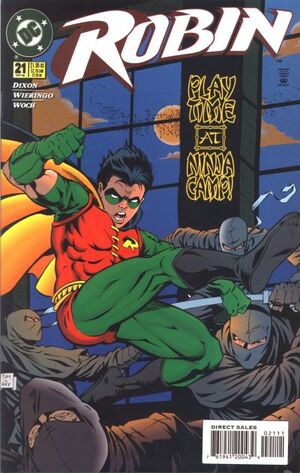 Tim Drake has some explaining to do when Mrs McIlvaine discovers Ariana in his bed - but as he slept in the spare room, and Dana is in the house, it's his father who ends up blushing... Robin later gets on the trail of a gang of ninja kid thieves, and surmising that they are being trained and recruited at a ninja camp, he gets himself sent off there.

Retrieved from "https://heykidscomics.fandom.com/wiki/Robin_Vol_4_21?oldid=1695117"
Community content is available under CC-BY-SA unless otherwise noted.