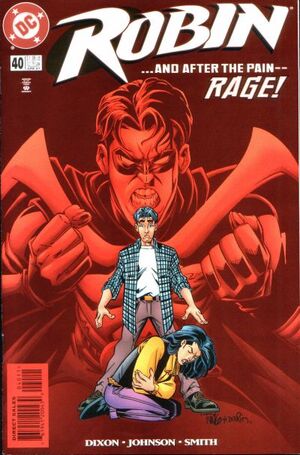 Despite the fact that DC Comics had spent 60 years depicting teenagers in dangerous and violent combat, the idea of one of those teenagers possibly having sex caused quite a stir in the DC offices. In the hands of a lesser writer, this issue would have come off like a 1970's Afterschool Special, but Dixon not only makes it work, he makes it brutally honest and powerful, reminding the older readers of how emotionally vulnerable their children can be, and teaching the younger readers that the decision we make can have dramatic effects on those we care about the most.

Retrieved from "https://heykidscomics.fandom.com/wiki/Robin_Vol_4_40?oldid=1672257"
Community content is available under CC-BY-SA unless otherwise noted.