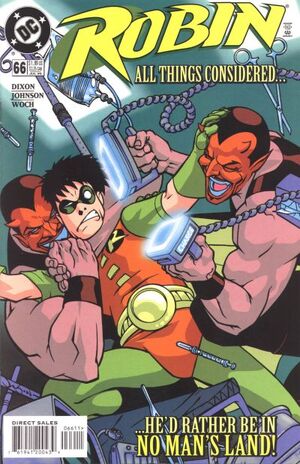 Tim Drake's parents have arrived back from Keystone City, agreeing with Tim that they should move back to Gotham City. However, trouble is brewing a few blocks away, when a gun-toting trio of Nicholas Scratch's henchmen storm the Blackburn Medical Center, demanding treatment from the doctors. While Shotgun Smith and a SWAT Team try to get through, old Tim tries to get down there as Robin. Can he make it?

Retrieved from "https://heykidscomics.fandom.com/wiki/Robin_Vol_4_66?oldid=1456347"
Community content is available under CC-BY-SA unless otherwise noted.