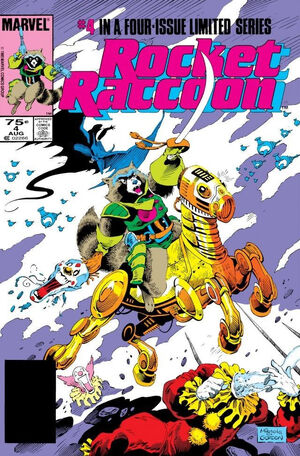 Appearing in "The Age of Enlightenment"Edit

Rocket and his crew introduce a new load of fabulous Wonder Toys to the loonies. But it's just a calm before an annihilating storm because rival toy-kings Judson Jakes and Lord Dyvyne have stopped their war with each other so they can combine forces to destroy Rocket Raccoon!

Retrieved from "https://heykidscomics.fandom.com/wiki/Rocket_Raccoon_Vol_1_4?oldid=1451153"
Community content is available under CC-BY-SA unless otherwise noted.