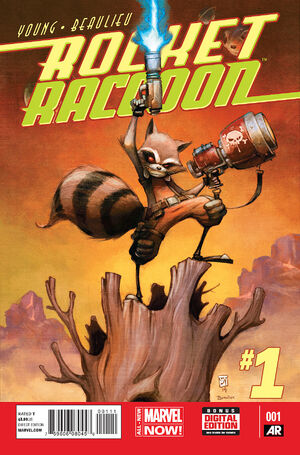 • As defenders of the cosmos go, Rocket Raccoon has faced his fair share of galactic battles. He’s been a hero to the weak, a champion of good, a protector of the innocent, a heartthrob to the many intergalactic female species and now--a raccoon on the run?! ( I’m sorry, I’m sorry, a “formidable-and-expert-Guardian” on the run. Rocket is NOT a raccoon, okay?) Rocket’s high-flying life of adventure and heroism may soon be a thing of the past when he becomes a wanted man—and the authorities are not the only one on his TAIL! (We’ll definitely be overusing that pun!)

• Superstar creator Skottie Young brings his A-game as writer and artist on the series we’ve been waiting decades for. Because let’s be real, this is the only Guardian of the Galaxy you actually care about. Am I right?

Retrieved from "https://heykidscomics.fandom.com/wiki/Rocket_Raccoon_Vol_2_1?oldid=1730884"
Community content is available under CC-BY-SA unless otherwise noted.