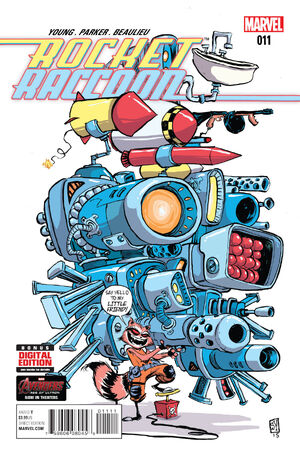 • Does the book of Half-World actually exist? Or was it all just one big HOAX?

• And finally, is Rocket really alone in the world?

• You’ll laugh, you’ll cry, you’ll wish you were a raccoon! (I mean a gun-wielding, smack-talking tough guy who happens to be covered in fur!)

Retrieved from "https://heykidscomics.fandom.com/wiki/Rocket_Raccoon_Vol_2_11?oldid=1649951"
Community content is available under CC-BY-SA unless otherwise noted.