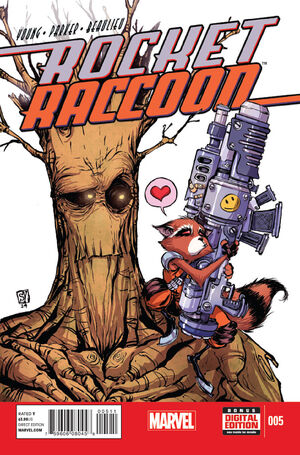 • As seen in the blockbuster Marvel Studios film, Guardians of the Galaxy, Rocket and Groot are back!

• It’s the breakout hit series of the summer! As their space adventures continue, find out why Rocket Raccoon and Groot are quickly becoming the hottest characters in the Marvel Universe.

• How does the most dangerously daring critter of the cosmos get the bad guys? With his two best friends: Guns and Groot!

Retrieved from "https://heykidscomics.fandom.com/wiki/Rocket_Raccoon_Vol_2_5?oldid=1649930"
Community content is available under CC-BY-SA unless otherwise noted.