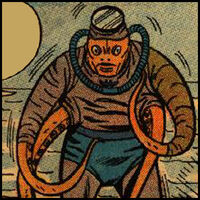 Rodney Roscoe went deep-sea diving to find a million dollar pearl below Octopus Cove. When he reached the giant oyster, he took the black pearl, ignoring an ancient legend of a curse. Suddenly, rays shot from the pearl and a strange radiation changed him into a Human Octopus. He briefly fought the Jaguar, who kicked the black pearl out to sea again. This caused Rodney to change back to human again.