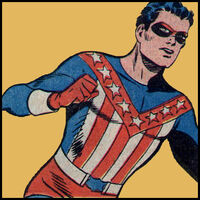 Roger Flemming (aka Lancelot Strong) became the test subject for an experiment conducted by his father, Professor Flemming. Professor Flemming wanted to understand "to what extent man could be developed physically, emotionally and mentally" in order to create "America's future space army." When the Professor was killed by enemy agents, all his papers were destroyed in the wreckage of his lab, leaving his son the only remaining evidence of his great experiment. Joining the Army as a lowly private, Lancelot Strong led a secret double life known only to a few select officers. They knew him as the Shield.

The above summation of the Shield's origin is taken from The Double Life of Private Strong #2.

Retrieved from "https://heykidscomics.fandom.com/wiki/Roger_Flemming_(Earth-MLJ)?oldid=1576276"
Community content is available under CC-BY-SA unless otherwise noted.