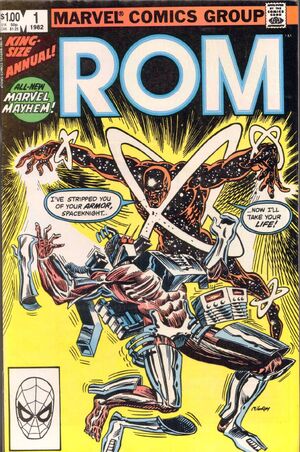 Appearing in "It Came from Beyond the Stars"Edit

Synopsis for "It Came from Beyond the Stars"Edit

A cosmic entity known at T’urin G’ar (Stardust) is expelled from ‘The Body’ and after much travel comes across the planet Earth where it first comes across a group of kids playing baseball in the town of Carson’s Glen. The entity craving a body of its own absorbs the life forces of the children. Rom observes a group of concerned parents and police searching for the missing children. His Energy Analyzer does detect something alien and while investigating finds the children in critical condition. Rom is confronted by the fearful search party and a number of Wraiths incite a riot against the Spaceknight and are unable to be detected due to new jamming technology the Wraiths had developed. One Wraith assumes the form of a bat to get news back that the jamming works when it runs into Stardust who consumes all the Wraith’s life energies which he finds far more satisfying. The entity then proceeds to hunt other Wraiths to feed upon. In the fight the Jammer is disrupted and Rom is able to detect the Wraiths that are among the searchers quickly dispatching them to Limbo. Rom then heads to the town where he had momentarily detected more Wraiths. A fleeing Wraith begs Rom to banish him rather than suffer being eaten by the entity and Rom obliges then proceeds to confront the entity himself. Rom thanks Stardust for helping him by dealing with the Wraiths but asks that he return the life energies of the children which causes Stardust to immediately name Rom as an enemy. The two battle and Rom uses his Neutralizer which only serves to negate the Starstuff Bonds that The Body had imposed on Stardust. Realizing his error, Rom takes upon himself the Starstuff belt and wields it against Stardust causing him to implode and all his energies to be drawn into the belt now worn by Rom. The Spaceknight goes to Carson Glen where he is fired upon by the townspeople as he enters the church and uses the belt to restore the life energies of the children thus healing them. Having cleansed the town of Wraiths and saved the children, Rom removes the Starstuff Bonds containing Stardust and sends it hurling back into the stars. Returning back to Earth, Rom encounters the van loaded with the Wraith jamming equipment. Rom strikes the van destroying the jammer and banishes the Wraiths.

A second story appears in the annual where Rom is summoned by a distress call from a fellow Spaceknight. He finds Gloriole being held captive. Rom releases Gloriole only to have his comrade shoot him in the back knocking him unconscious. Rom awakens to find himself being held and the renegade Gloriole trying to explain that his actions are for the greater good to allow him to ally with the Wraiths to gain the secrets of their sorcery. When the Wraiths tell Gloriole that they intend to take Rom to the Dark Nebula for study and entertainment, the renegade Spaceknight repents of his betrayal and frees Rom as he himself is slain by the Wraiths but his distraction allowed enough time for Rom to recover and banish them to Limbo. Rom takes the body of his fallen brother and buries it on a distant asteroid.

Retrieved from "https://heykidscomics.fandom.com/wiki/Rom_Annual_Vol_1_1?oldid=1451183"
Community content is available under CC-BY-SA unless otherwise noted.