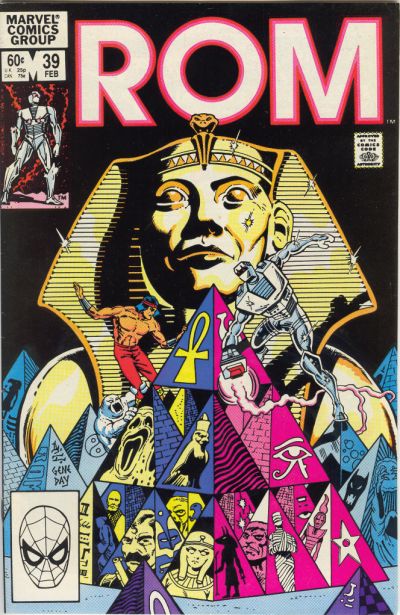 Shang-Chi and his associates arrive in London to see the mummy of the Egyptian child princess known as Kaaris’a. Sir Denis Nayland Smith tells them of the tale found on a papyrus scroll of how a Pharaoh saw a star fall from the sky in midday and found a strange glowing craft. From it came a small loathsome creature that changed shape into all the Egyptian gods until finally appearing as a small maiden child that won over the Pharaoh’s heart. She then used her position to begin a reign of terror until the people rose up and overcame her burying her alive. The group leaves the museum at closing time as another group of shrouded figures enter. They entrance the security guard and lead a number of children inside. Rom and Shang-Chi had both hidden themselves in the museum and they stealthily follow the unholy figures. In Clairton, a worried Steve Jackson goes to check on Brandy and finds her at her lab where Doctor Dredd is mystically merging her with the Starshine armor. The entranced children begin to unwrap the mummy of the still living Kaaris’a as Rom and Shang-Chi both step forward to halt the abomination. The Wraiths animate many of the museums displays to battle the two. As the battle continues the rest of Shang-Chi’s associates enter and join the fray. Rom banishes all the Wraiths as Kaaris’a is finally freed by the entranced children. Rom and Kaaris’a battle and Shang-Chi grabs shuriken from a case that he flings at the Witch-child, severing her head. As she crumples to dust, the children are released from the spells that bound them.

Retrieved from "https://heykidscomics.fandom.com/wiki/Rom_Vol_1_39?oldid=1451227"
Community content is available under CC-BY-SA unless otherwise noted.