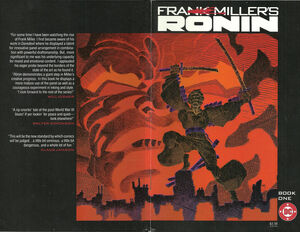 A samurai and his lord are out and about when they are attacked by three assassins. They dispatch the assassins and the lord's sword drinks its enemy's blood. The lord tells the samurai that his enemy the demon Agat wants this sword more than anything, because one it has drank the blood of an innocent, it can be used to destroy Agat. That evening, Agat takes the form of a dancing girl and slays Lord Ozaki. The samurai fights off Agat, but not before receiving a scar over his left eye. The spirit of Lord Ozaki tells the samurai to take Ozaki's sword and disappear. To roam as a ronin and once he has honed his skills to face Agat and avenge his death.

In the bowels of the Aquarius Complex, a biotechnology facility in a dystopic future New York City, Billy Challas is awakened from a day dream by Virgo, the facility's computer. Together they listen in on the spiel Mr. Learnid gives to the visitors on their tour of the facility. They take a tour of the place and meet the security chief, Casey McKenna. Billy goes to sleep and dreams of a Japanese ronin.

The ronin kills two samurai who were about to take sexual advantage of a woman. Then he makes a fire for the woman and her child. He tells them how at dawn he will kill an innocent with his master's sword and then kill Agat.

In the morning, the ronin goes to the demon's castle and slays his gate guard, a four armed man-rat. He enters the castle and fights Agat. He plunges the sword through his own body and into Agat. Before Agat can die he curses the ronin, trapping him in the sword with Agat.

Billy awakens from the dream, telling Virgo about it. Virgo searches her memory banks and finds a news article about the sword resurfacing in South America. It was acquired by an inventor who used a laser on it in an experiment that incinerated everyone there. The sword vanished. Billy tells Virgo that the ronin and Agat's souls were freed when the laser hit the sword and that the ronin wants Billy's body. He surmises that Agat must want someone else's body also. Suddenly an intruder alert sounds. Virgo calls up an image of Agat killing some guards on her screen. Billy's face scars just like the ronin's. Billy begins transforming and Agat comes for him. There is an explosion blowing both of them into the city. Billy rises in the sewer of New York. He has now assumed the form of Ronin.

Retrieved from "https://heykidscomics.fandom.com/wiki/Ronin_Vol_1_1?oldid=1470031"
Community content is available under CC-BY-SA unless otherwise noted.