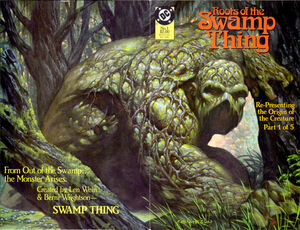 Dr. Alec Holland had all the answers... he was an intelligent man... but Alec Holland is dead... and in his place stands only a... SWAMP THING!

D.D.I. agent Matthew Cable drives his friends, the scientists Alec and Linda Holland, to a remote cabin in the Louisiana bayou. The Hollands are working on a top-secret Bio-Restorative formula designed to stimulate hormonal growth in plant life, enabling plants to grow in hostile terrain.

Midway through their research, they hear a knock on the door. A group of men representing an organization known as the Conclave introduce themselves, and expresses great interest in the Hollands' work. The leader of the men, Maxwell Ferrett, offers the scientists a blank check in exchange for exclusive rights to their work. Alec tells them that their information is not for sale. Ferrett prepares to strong-arm them, but another man, Bruno, notices Matt Cable's car pulling up to the cabin. Ferrett and the others leave, promising to return. Alec and Linda tell Matt about their encounter.

Ferrett reports back to his boss, Mister E. Mister E tells them to make one more attempt to buy the Hollands' research. If they still refuse, then drastic measures will be required. Ferrett returns, but Alec angrily threatens to call the cops unless they leave them alone. The goons knock Alec unconscious, and plant an explosive underneath one of the laboratory tables. Alec comes to and tries to escape, but the bomb explodes dousing him with various samples of the Bio-Restorative formula. His body erupts into flame, and Alec stumbles outside into the swamp where he falls over dead.

Days later, Linda and Matt Cable hold a small funeral service for Alec Holland. What they do not realize is that the Bio-Restorative formula has resurrected the essence of Alec Holland into the body of a grotesque Swamp Thing. Although he still maintains the intellect of Alec Holland, he cannot speak. The Swamp Thing stands guard, and watches over the cabin after Linda returns home.

Ferrett and Bruno raid the cabin and murder Linda. The Swamp Thing finds her body and flies into a rage. He chases the men out into the swamp. He catches Bruno first, and smashes his jaw with one solid punch. Ferrett fires his pistol at the monster, but the bullets are ineffective. The Swamp Thing turns about and kills Ferrett. Matt Cable appears on the scene, and mistakenly believes that the muck monster is responsible for the death of Linda Holland.

Elsewhere, miles away in an ancient castle, a mysterious man observes the events in the Louisiana bayou and develops a strong interest in the Swamp Thing.

Appearing in "The Man Who Wanted Forever"Edit

Synopsis for "The Man Who Wanted Forever"Edit

Retrieved from "https://heykidscomics.fandom.com/wiki/Roots_of_the_Swamp_Thing_Vol_1_1?oldid=1495811"
Community content is available under CC-BY-SA unless otherwise noted.