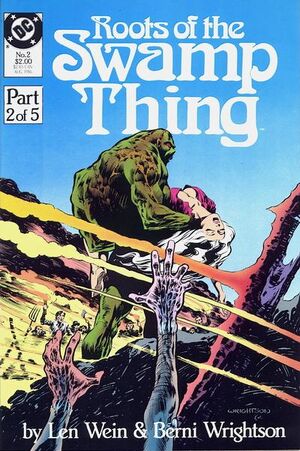 He killed my friends -- Linda and Alec Holland -- and someday -- somehow -- I'm going to make him pay!

Appearing in "The Patchwork Man"Edit

Synopsis for "The Patchwork Man"Edit

Swamp Thing scales the cliffs leading to the ancient castle of his late nemesis, Anton Arcane. Upon reaching its peak, Swampy begins exploring Anton's laboratory, but a flagstone floor gives way beneath him threatening to drop him into some unknown abyss. A zombie-like Patchwork Man is present in the lab and tries to pull the Swamp Thing to safety. But he cannot keep his grip and Swampy falls down to the bottom of a vast cavern. The Patchwork Man then sets to destroying the lab causing the entire castle to explode.

Down in the nearby Balkan village, Interpol agent Matt Cable continues searching for the Swamp Thing. He blames him for the deaths of Alec and Linda Holland and wants revenge. He meets a medic at a nearby clinic named Abigail. Abigail just happens to be the niece of the mad scientist Anton Arcane. Matt and Abigail see the explosion of the castle and begin making their way towards the bridge that leads to the castle's cliff-side.

The Patchwork Man appears and Abigail faints from fright. He gingerly picks her up and begins taking her across the bridge. Swamp Thing appears (having climbed through the wreckage of the castle) and begins fighting the Patchwork Man. Abigail is about to fall from the bridge, but the Patchwork Man rescues her. As she looks into his eyes, she realizes that it is her father, Gregori Arcane – another sad experiment of her demented uncle.

Matt catches up with Abigail and the two take a sea-plane away from the Balkan village.

Appearing in "Monster on the Moors"Edit

Synopsis for "Monster on the Moors"Edit

The sea-plane carrying Matt Cable and Abigail Arcane crashes into the moors of Scotland. What they don't realize is that the plane has a stowaway. Swamp Thing has been clinging to one of the plane's pontoons ever since they left the Balkans.

Angus and Jenna MacCobb find Matt and Abby and offer them shelter at their ancestral home. They spend the night inside the house while Swamp Thing remains outside silently observing them.

That night, Mister Rodman, the pilot of the plane goes out to check on the plane when he is attacked and killed by a mysterious creature. The MacCobbs discover his body, and Matt and Abigail are forced to impose upon their hosts even longer than they intended.

That same evening, the Swamp Thing finds a werewolf stalking the moors outside the MacCobb house. The two get into a fight that ends in a stalemate.

The following evening, Matt and Abigail meet Ian MacCobb, Angus and Jenna's son. Jenna later poisons Matt and takes him to a secret basement laboratory. She has both Matt and Ian strapped to a table. She intends on performing a blood transfusion, hoping to transfer the curse of the werewolf from her son's body into Matthew's. Ian transforms into the werewolf and goes berserk. Swamp Thing bursts into the house and fights the werewolf. He kills him by impaling him on a silver-tipped chandelier.

Retrieved from "https://heykidscomics.fandom.com/wiki/Roots_of_the_Swamp_Thing_Vol_1_2?oldid=1495813"
Community content is available under CC-BY-SA unless otherwise noted.