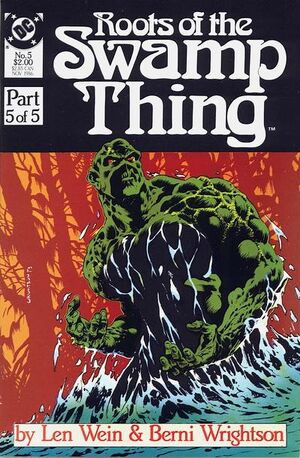 Appearing in "The Stalker From Beyond"Edit

Synopsis for "The Stalker From Beyond"Edit

Matt Cable is called back to Washington where he is assigned to work with a military task force led by captain Brad Samson. A UFO was sighted near the Louisiana swamps where Cable had begun investigating the Holland murders and his knowledge of the area is shown to be beneficial to the task force.

Meanwhile, the Swamp Thing has finally made it back to Houma, Louisiana and he arrives at the shack where he had been conducting his experiments. As he enters, he finds that the above-mentioned UFO had moved his space-craft inside the shack so that it could affect repairs. Swamp Thing and the alien briefly fight one another, but the alien overpowers him. He dumps Swamp Thing's body into the swamp.

Samson's team arrives and they find the alien. They slap a pair of hi-tech manacles onto it, and chain it to a tree. But Samson has no intention of following orders and brining it back to base. He intends on killing it.

Swamp Thing arrives, now realizing that the alien was peaceful and only attacked because it perceived Swampy as a threat. Swamp Thing stops Samson from killing the alien. He sets it free and guides it back to its ship.

The alien launches from inside the shack and blasts off into the atmosphere. However, it never completed the necessary repairs to its ship and it soon crashes back down onto the surface.

Appearing in "The Man Who Would Not Die"Edit

Synopsis for "The Man Who Would Not Die"Edit

Swamp Thing wanders through the swamp until he finds an old black woman outside of a shack named Auntie Bellum. Auntie tells Swamp Thing a tale of the slavery days when there was a thriving plantation owned by a man named Samson Parminter. Parminter was a ruthless overseer and frequently abused his slaves including a woman named Elsbeth. But Elsbeth's lover, Black Jubal, fought against Parminter to save Elsbeth. As punishment, Parminter had Black Jubal killed.

Shortly after hearing Auntie Bellum's tale, Swamp Thing heads towards an old, lost cemetery where he finds the Un-Men. Anton Arcane is leading the Un-Men and has come from the Balkans to capture the Swamp Thing. Arcane's body had been destroyed in their last fight, but he used his telepathy to command his Un-Men to fashion a new synthetic body for him. But Arcane's current form is a grotesque mockery of humanity. He wants to transfer his mind into the Swamp Thing's body in order to master its strength and power.

The two enemies begin fighting and it looks as if Swamp Thing is going to lose, until the tombstones from the graveyard topple over and the ghosts of Black Jubal and other slaves rise up. Black Jubal waves his hand towards Swamp Thing and he passes out. Then, Jubal and the others descend upon Anton Arcane and the Un-Men.

When Swamp Thing wakes up, he finds there is a new tombstone with Arcane's name written on it in blood. There is no sign of Auntie Bellum or the shack she had lived in. He finds another gravestone with the name Elsbeth Bellum etched onto it. Apparently Auntie Bellum was the ghostly lover of Black Jubal.

Retrieved from "https://heykidscomics.fandom.com/wiki/Roots_of_the_Swamp_Thing_Vol_1_5?oldid=1495816"
Community content is available under CC-BY-SA unless otherwise noted.