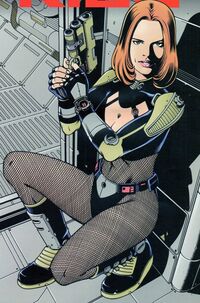 The eponymous protagonist of 2000 AD strip Rose O'Rion is a spacefaring female thief for hire, who is frequently hampered in her chosen profession by an unfortunate tendency to have a conscience.

Rose O'Rion first appeared in a series of stories called Pulp Sci-Fi before graduating to her own strip.

Retrieved from "https://heykidscomics.fandom.com/wiki/Rose_O%27Rion?oldid=1581611"
Community content is available under CC-BY-SA unless otherwise noted.