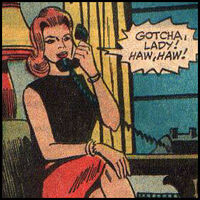 Rose Wayne Raymond, or "Rosie," was a student of Professor John Raymond's Criminology class. After she and John were assaulted by some Japanese spies, Rose noticed a spider clasp that was dropped by the professor and concluded he must be the Web.

Being that she was studying Criminology, she began to follow John, and became enamored with him because he was the Web. Soon they were dating, and John confessed about his dual identity. They finally married, and at first she enjoyed the glamorous life of being "Mrs. Web." However, over time she became a fussy and emotionally manipulative wife. She often would threaten John with divorce and even infidelity. Always running to mother, but never divorcing John, she continued her hen-pecking and poor John carried on being her spineless spouse while sneaking out to be the heroic Web.

Retrieved from "https://heykidscomics.fandom.com/wiki/Rose_Wayne_Raymond_(Earth-MLJ)?oldid=1578690"
Community content is available under CC-BY-SA unless otherwise noted.