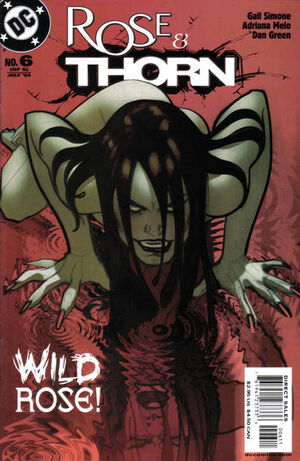 You listen up. I let her dad and mom die. I let her be stuck in a cage for nutcases. I'm not putting her back inside. I'll eat a bullet first.

Ashleigh Penzler pours accelerant on Rose Forrest and prepares to set her on fire. Ashleigh sets Rose on fire and Rose takes her clothes off to avoid getting burned.

Detective Curtis Leland goes to see Mr. Harris to plead for his Rose's (his niece) life. Mr. Quince shoots him.

Leland's body is found along with a notepad detailing every criminal activity he participated in, including a confession to the murder of Rose's parents.

Retrieved from "https://heykidscomics.fandom.com/wiki/Rose_and_Thorn_Vol_1_6?oldid=1456490"
Community content is available under CC-BY-SA unless otherwise noted.