Roy Chambers grew up in on a small farm, and as a youth growing up in the Great Depression he saw everything drying up and longed to be rich and famous. He grew desires to move to Hollywood and become rich and famous, even though others believed that he would find nothing but failure.. By the 1940s he began trying to live that dream, inspired by the comic book character known as the Scarlet Sabre[2], he took on costumed heroics as a platform to his quest for fame and became the Blue Blade. However the rest of the costumed hero community referred to him as a "tourist", a hero who was only in it for fame and glory[3].

Little is known the Blue Blade's career prior to the United States officially entering World War II. In his first recorded appearance, circa 1942, he saved a scientist and his atom smasher device from a Japanese spy named Sandai[4].

By 1945, Blue Blade drafted into the military, and while he did see combat in the war he managed to still keep his eye on someday becoming famous and was involved in many USO shows during the European tour[5]. On August 25, 1945, he fought alongside the Invaders and many other heroes against the Nazis during the final days of the war.

He joined a group of super-heroes who stormed the the headquarters of the S.S. searching for snipes. Along with him were the heroes Phantom Reporter, Mister E, the Witness, Black Widow, Electro, Dynamic Man, Mastermind Excello, Captain Wonder, Laughing Mask, Fiery Mask and Rockman. They were led into a Nazi trap and gassed and placed into suspended animation to be experimented on later. However, the Soviets soon stormed Germany and defeated the Nazis, killing all those who trapped the heroes and they were long forgotten....

... Until the 21st Century when the heroes were uncovered by a construction crew building a new condo project in Berlin. The U.S. Government was alerted and they had decided to revive the long lost heroes to present the to the public as heroes that would trust the government in light of the earlier super-hero Civil War. The heroes were kept thinking they were in the 1940s through clever staging in order to lesson the shock but they eventually learned the truth. During a military briefing they were offered government service and all members, Blue Blade included, agreed to join and became loosely referred to as the Twelve[3]. Blue Blade found this a perfect opportunity to find the fame and fortune he always wanted[6].

The news about the groups revival hit the news, Blue Blade used his new found media appeal to begin talking to agencies in an attempt to get a job in television[7]. He eventually gained the interest of the William Morris Agency who agreed to listen to his proposal for a television show. Seeking a sidekick to join the show, he offered the position to the Rockman asking him to provide his origins to William Morris. After Rockman told Blue Blade of his home of Abysmia and his supposed origins, the Blue Blade thought it was too far fetched and his suggestion to tell them that Rockman was found at a circus was not well received and Blue Blade dropped the offer. Later that night, Blue Blade was present at a going away party for Mastermind Excello. The party went sour when Dynamic Man came and left Electro with them, starting a fight with the Phantom Reporter. Having a second look at the robot, Blue Blade realized that he finally may have found his co-star on his television series[8]. Finally came the day to show off his idea for the networks, however his jokes were considered dated and unfunny and it took his agent at William Morris a lot of convincing to land the Blue Blade a six episode deal[9].

On the premier of his first episode, it seemed that the viewing public and critics had the same opinion about the Blue Blade show and ratings began to drop[10]. With the show facing imminent cancellation, Blue Blade remained optimistic, believing that he had not yet captured his audience, although his agent did not believe that they would last much longer. Spotting the Electro robot as it was being placed in temporary custody of Elizabeth Zogolowski, Blue Blade found the opportunity to get the robot on the show. He proposed to Elizabeth to let him use the robot and pay her money for her upcoming legal battle against the United States government to reclaim full custody of her fathers invention[11]. Elizabeth agreed and brought Electro and the robots control panel to the television studio. There, Blue Blade was allowed to test out the robot. When Blue Blade accidentally activated the memory back-ups his mind was flooded with the robots memories, learning that Dynamic Man was using his connection to the robot to murder those he believed to be living in sin. He then called the Dynamic Man to make a deal. The details of this deal are unknown, but were probably to further Blue Blade's desire of fame[2]. The following day, after Elizabeth ran final diagnostics on the robot she told the Blue Blade that her father, the late Philo Zog went mad before he died and warned him that the madness may have effected the robot as well. Blue Blade dismissed this, knowing the truth, however Dyanmic Man then used the robot to kill Blue Blade, crushing his throat before throwing him out the window and causing him to fall to the ground below[2][3]. Eventually, the Phantom Reported learned the truth and he and his group members eventually destroyed Dynamic Man, avenging Blue Blade and all his other victims[12][13][14]. 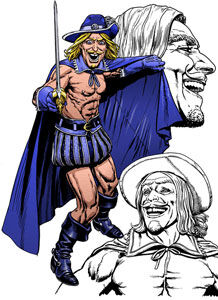